The proliferation of the term ‘propaganda’ proves the potential power of art in society. Whether labeled propaganda, political art, or protest art, the underlying vein is its influence on the public. There have been few political systems in history that prioritized propaganda more than did Nazi Germany. Perhaps Hitler’s aspirations for art school allowed him to fully appreciate the strategic potential of an effective propaganda campaign. This manifested in massive construction projects and strong, beautiful (and Aryan) men and women in painting and sculpture, all classically inspired. Nazi Germany, the antithesis of a democracy, explicitly delineated what fit within the canon of Nazi art, and what did not, and this distinction forcibly permeated throughout the nation. Nazi propaganda thrived on the dehumanization of non-ideal, non-German culture, and contemporary art was certainly within Nazi sight. Labeled ‘Degenerate Art’, or Entartete Kunst, the non-canonical art produced within the Nazi regime was not censored or subdued as might be expected, but rather showcased in a state organized exhibition for all of Germany to see. As Joseph Goebbels said on the opening day of the exhibition, “German Volk, come and judge for yourselves!”

Unsurprisingly, the Degenerate Art exhibit was not conducted to support modernist artists of the time. The entire project was a strategic play to further cement in the minds of the German Volk what constituted as German culture, and what was considered Degenerate.

The Degenerate Art Exhibit which opened in Munich on July 8, 1937 and displayed a wide array of modernist and avant garde artworks, served as a counterexhibit to the Great German Art Exhibition, Grosse Deutsche Kunstausstellung. The two exhibits were eachperverted reflections of each other. The artworks displayed in the Degenerate exhibit were described as “sullied reflections of the same generic images the Nazis sanctify as subjects for ‘Great German Art’: farmers, soldiers, mothers, and landscapes”¹. Goebbels and the Nazi exhibition organizers curated this production for this exact purpose: to manufacture a cultural juxtaposition.

The entire Degenerate Art Exhibit consisted of 650 individual pieces of sculpture and painting by German artists (with a few other European exceptions). The pieces were seized from museums and galleries from around the country by order of the government. It took less than one month for the entire exhibition to be erected, and the exhibition’s curation was fitting with this rushed job. The paintings, labeled with plaques misidentifying the works, overcrowded the walls. Red stickers posted under many of the artworks featured captions stating that they were funded by the German Volk, a message intended to shock German citizens by suggesting that their taxes financed the works on view. Despite the apparent curatorial flaws of the Degenerate exhibit, every decision was meticulously and strategically executed. By giving the public direct access to the artwork that fundamentally opposed the Nazi ideals, Goebbels not only invited the people to ‘judge for themselves,’ but also carefully constructed the public perception he desired. The haphazard presentation and faulty identifications led the public to see nothing but the nonsensical work of degenerates, or art-bolsheviks.

Moreover, much of the work was auctioned off following the exhibit, which suggests hosting the exhibit maintained some political value. Like much of Hitler’s ideology on racial and national contamination, the Degenerate Art (or ‘Jewified’ or Bolshevik) served to produce a common enemy; opposition to Germany’s dominance. In displaying the modernist artworks, the curators were actually displaying the “symptomatic product of a contaminated political past.” Central to Hitler’s mantra of a national ‘rebirth’ was the identification of a burdened past. The juxtaposition of the Degenerate and the Great German arts polarized the “arts of those days and the art of our days.” German ‘rebirth’ required a cultural collapse from which  to recuperate.

In acquiring the exhibit’s content, the Nazis had particular criteria to meet. They needed to find works whose interpretations they could manipulate. The vast majority of the works displayed were Expressionist. Of the represented artists, the more recognizable names on the roster included; Otto Dix, Wassily Kandinsky, Ernst Ludwig Kirchner, Piet Mondrian, and Emil Nolde — essentially a list of the most impactful Expressionist artists of the modern era.Some of these artists were German Expressionists, which further complicated matters, as  many wondered if Expressionism would become the National Socialist revolutionary art. Goebbels himself had owned and displayed in his home Emil Nolde’s and Kathe Kollwitz’s work. While a neoclassical style was chosen instead, German Expressionism’s potential role in representing the movement explained the overwhelming presence of expressionism in the exhibit. However, German Expressionism was a direct product of the Weimar Republic — a history that the Nazis tried diligently to erase from their past.

Tellingly, the absence of John Heartfield from the Degenerate Art Exhibit was one of the greatest indicators of the Nazis intentions for the show. John Heartfield, whose work regularly appeared in magazines, such as AIZ, which explicitly opposed Nazism, was a graphic designer and photo-montage artist appropriately identified with Degenerate artists. With works widely circulated and featured in shows throughout Germany, Heartfield would not have been overlooked. Even in his shows, he would always insist that work be printed and made available in an attempt to emphasize that art resided in the message, rather than within the material image. 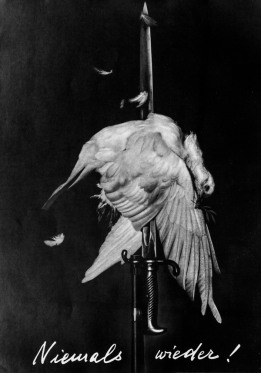 A few possible reasons may help understand his absence from the show: His work was explicitly combative against Hitler, it was designed to be machine reproducible, and he primarily worked with photographs — a medium understood at the time to be a means of documentation as opposed to an artistic medium. Heartfield’s  photomontages were simply too explicit in their delivery. His work left was no room for misinterpretation, and consequently the Nazis could not manipulate the reception of the montages. Moreover, his artwork were inexpensive and readily reproducible. The red dots indicating prices of the degenerate art works would hold no weight on a photomontage designed to be inexpensively reproduced.

In total, the exhibit received 2,009,899 visitors. While no documented accounts of the exhibits’ receptions exist, the enterprise’s goal was not to elicit good press. Goebbels was less interested in publicizing the Degenerates’ work and more interested in the prioritizing the “spectacle made by the constant stream of visitors.” Today, the names of German Expressionists Kandinsky, Kirchner, and Dix live on, and are more widely recognized than the Nazi-favored German neoclassicists Ziegler, Breker, and Thorak. The German Expressionists and the other ‘Degenerates’ created the visual aesthetic that defined the counter political climate within Nazi Germany that cemented their political disdain onto the world stage of 20th century art and cemented their presence in global history.

This is a text widget, which allows you to add text or HTML to your sidebar. You can use them to display text, links, images, HTML, or a combination of these. Edit them in the Widget section of the Customizer.

This is a text widget, which allows you to add text or HTML to your sidebar. You can use them to display text, links, images, HTML, or a combination of these. Edit them in the Widget section of the Customizer.
%d bloggers like this: